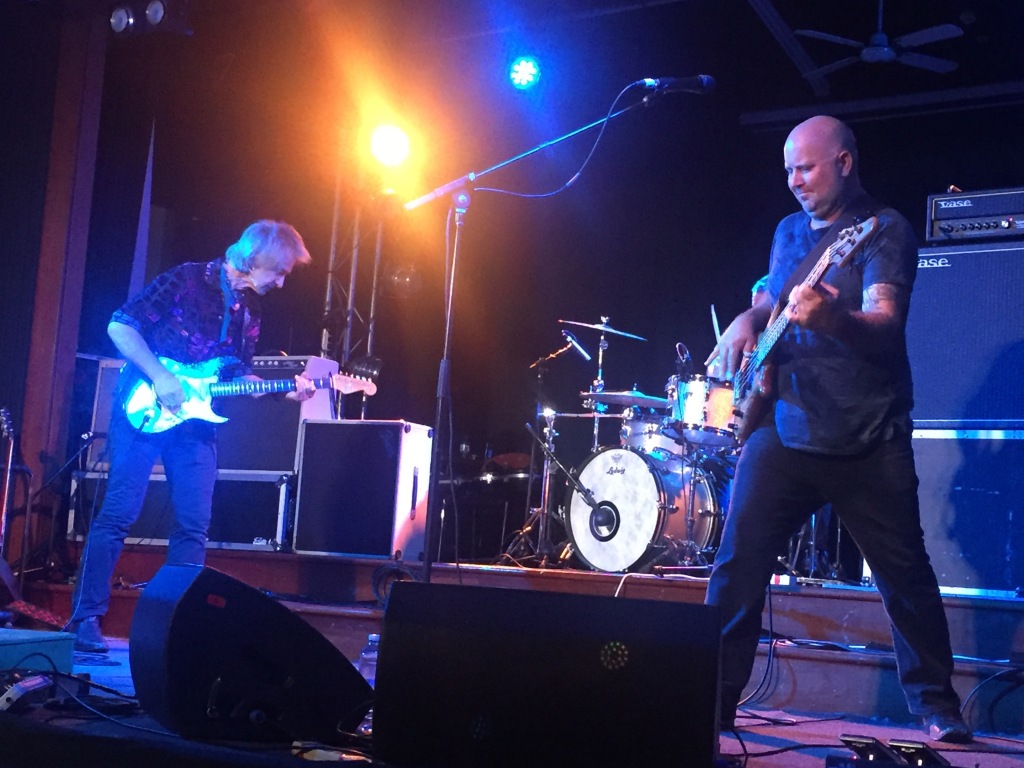 A healthy crowd of people stood waiting at the base of the stairs in readiness for a rare Adelaide appearance of the Kevin Borich Express, when we were informed that there would be a slight delay whilst the band readied themselves for the show.

To counter the under the breath grumbling at this slight inconvenience, the German Club front of house manager also informed us that KB had decided that the band would be performing a longer show than advertised – at least two hours. So smiles all round, then.

Opening the show was ex-pat Adelaidean and old friend of Borich, Gwyn Ashton, who is now based in the U.K.

Ashton played a bluesy three song set of acoustic slide guitar songs, mostly from his latest album Prohibition, recorded in Scotland with various members of the Sensational Alex Harvey Band and Deep Purple in tow. On the evidence of these three tasty tunes, the album would be worth tracking down.

Borich and his rhythm section – Chris Gilbert on bass and Jon Carson on drums – hit the stage and went straight into a great version of Rescue Dream from 1977’s Lonely One album. This opening number set the agenda for the evening – pulsing, loud guitar rock that underlined why Borich is widely regarded as the godfather of all Antipodean guitar heroes.

Lonely One was well represented with South American tinged Tango Queen, and the rockier Good To See You also making the cut later in the set.

Borich didn’t hold back on the old classics from the band’s golden age, and the other album from ’77, Celebration, also got fair coverage.

The band’s current version of the album’s opener, Snowball King, is magnificent. The crunching guitar takes you back to those heady days when the guitar riff ruled. The rock steady drumbeat from Carson, and the awesome bass runs from Gilbert, topped off a performance that was as exciting as rock and roll can get.

In a set full of scorching guitar highs, Celebration, was perhaps the most ascendant with the introduction of Rob Pippan on second guitar, duelling furiously with Borich.

To prove that the band is far more than a heritage act living off past laurels, a brace of songs from the latest album, Totem, were just as strong as any of his earlier triumphs.

Stronghold, just as the title suggests, was a song delivered with plenty of muscle; and Borich’s ‘first ever bondage song’, Tie Me To Ya, was equally as powerful.

Poignantly, Borich defiantly introduced the other song from Totem – Fight On – as containing a riff that popped out after he had won his battle with the cancer that ravaged him a decade ago. The riff was as tough as the man himself.

Obviously, he had to play some material from the band that originally brought him to attention in this country, and when he sung the slow intro to The La De Das monster hit, Gonna See My Baby Tonight, the creaky joints of his ageing fans suddenly stopped complaining enough to have every one up and dancing as if they were back at Headquarters on Grote Street at the turn of the seventies.

La De Das fans would have also have been happy to hear The Place, originally from the band’s 1973 album, Rock And Roll Sandwich, which still sounded as great as ever.

After finishing the night with a couple more barnstorming songs from Celebration, Goin’ Down Town and Goin’ Somewhere, the band left the stage to rousing applause surely satisfied in the knowledge that they had just delivered an exceptional masterclass in rock, funk and blues.

Kevin Borich Express play two more Adelaide shows on this tour – at The British Hotel on Saturday March 18 at 8:30pm, and play The Beach House in Encounter Bay on Sunday March 19 at 1:30pm.